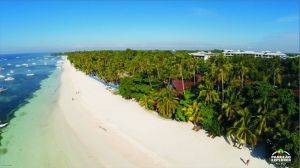 Bohol is like a jade brooch set on a velvet-blue sea. Its fertile land has hills that roll gently around lush forests and grassy meadows. Marine life – from schools of tiny reef fish to bigger pods of dolphins and whales – teem in the surrounding waters.

At the market, one can have a pick of the day’s fresh sea catch and have them cooked home-style at any of the food stalls. 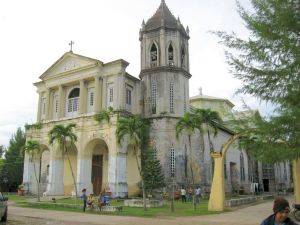 The Church of Our Lady of the Immaculate Conception in Baclayon is considered to be one of the oldest churches in the Philippines. It is one of the best persevered Jesuit build churches in the region, although in the 19th century, the Augustinian Recollects added a modern facade and a number of stone buildings that now surround the church.

There are also fishermen selling Neptune’s bounty for instant grills. A river cruise through pastoral Cambuhat River in Buenavista leads one to the oyster farms from where one can indulge in real fresh “slipper oysters.” 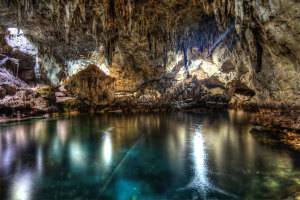 With its limestone foundation, the province of Bohol is also known as “Cave Country.” An average of 30 caves are found in each ofits 47 towns, many of them still unexplored. It is said that Bohol got its name from the word boho, meaning “hole.” [ the term boho really means hole from which spring water usually gush forth, common in many coastal areas of this island].

The Francisco Dagohoy Cave in the town of Danao is especially noted for its historical role. It was once the headquarters of the Boholano patriot Dagohoy who led an extended rebellion against Spain starting in the first half of the 1700’s. One of the many crystal-studded passages within the cave’s maze has an underwater route leading to dry land. Local lore has it that every time Spaniards would enter the cave, Dagohoy would dive under and hide in the breathing space.

The largest cave, however, is Sudlon. Nestled in a lovely mountain environment, it hosts a huge population of bats which emerge like vast stormy clouds at dusk. 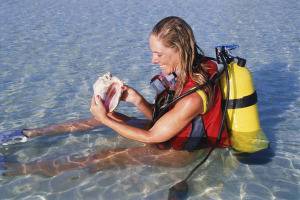 The dive sites of Bohol are noted for their deep, steep walls – the creation of continental shifts during prehistoric times.
Just over the causeway from Tagbilaran is Panglao Island with its spectacular drop-offs.

The crab-shaped Balicasag Island has long established itself as a great dive spot. From here, island-hopping and whale-watching expeditions can be organized right here at Panglao Tropical Villas.

Pamilacan Island is yet another popular diving destination. Pamilacan, which means “resting place of the mantas,” is also noted for its big whales called “balilan” and the highly prized rare seashell Gloria Maris.
Pantudlan in Cabilao Island is frequented by many foreign diving enthusiasts. 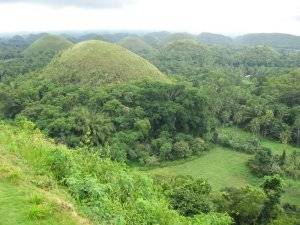 The Tarsier Trail is a pathway from where one may become acquainted with a wide variety of local flora and fauna, including the tiniest primate on Earth.

Covering a distance of roughly 15 kilometers, the trail meanders through the gently rolling terrain of the interior towns of Corella, Sikatuna and Loboc. It traverses the natural habitat of the Philippine tarsier, one of Earth’s oldest mammal inhabitants. A 45-million-year old prosimian species, it is popularly known as “the world’s smallest monkey.”

Going deeper into the trail, one gets the chance to see some endemic birds like the serpent eagle, brahmini kite, woodpecker, rocky-tailed blue-headed parrot, grass owl, bubock pigeon and water cock. There are jungle animals like the monkey, python, cobra, macock and palm civet cat. It also teems with insects, the staple diet of the tarsier.

From the forest, the trail crosses over into Loboc River. Here, bamboo rafts are for rent, from where one may glide down the placid, green river to the seaport of Loay. One can also partake of a native seafood buffet or a hearty snack in any of the floating restaurants that cruise on the river.

Trained volunteer guides, mostly college students from Tagbilaran, bring trekkers through the 134-hectare forested area that has been set aside as the Tarsier

During the 16th century, a “Treaty of Friendship” was forged between the brown and white races, sealed by the blood compact of the Boholano chieftain Datu Sikatuna and the Spanish Captain Miguel Lopez de Legazpi.

Some 302 years of Spanish rule followed after the treaty. It was a rule bathed with sweat and tears, as native sons plodded in hard labor building massive fortresses and grand colonial churches. More blood was also shed in the many attempts to free the motherland from the shackles of Spanish domination. To this day, there still stands in Bohol many structures that serve as mute testimonials to its rich historic past. 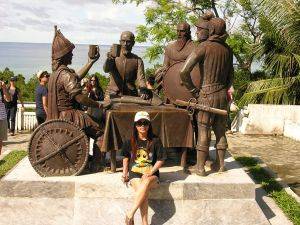 Baclayon Church, is the best preserved Jesuit-built church in the region, although its facade and most of the stone structures surrounding it were built by the Augustininan Recollects in the late 19th century. The Christian community organized by the Jesuits on November 17, 1596 and thereafter a visita was erected on the site. Baclayon was canonically raised to the status of a parish only in 1717, the present stone church was completed in 1727. The Casa parroquial was built by the Augustinian recollects in 1872. An ecclesiastical museum was established in 1969/70. Its narthex has the cuadro paintings of the historically acllaimed Filipino painter Liberato Gatchalian. Paintings were executed in 1859. Declared a national historical landmark in 1995 by the National Historical Institute. Its convent has been transformed into a museum and houses priceless religious artifacts.

Other mission churches of architectural distinction include Dauis Church with its beautiful frescoes, Loboc Church with its three-story convent, Panglao Church with its ornate antiquities and ceiling murals, Loon Church, the most stunning church built by the Recollect Friars, and the 19th century Maribojoc Church.

Also found in the town of Maribojoc is the ancient Punta Cruz watchtower which used to serve as a look-out for marauding pirates. It now serves as a view deck and offers a picturesque vista of the Mindanao Sea and the provinces of Cebu and Siquijor.

Other watchtowers of note can be found in the towns of Loay, Balilihan and Pamilacan Island.

More than 1000 hills in number – consisting of thousands of cone-shaped mounds scattered over 50 sq kiliometers around the towns of Sagbayan, Carmen and Sierra Bullones in central Bohol. Each hill rises 30 to 120 metes above the surrounding plateau. The hills look like chocolate drops when the grass turns brown, hence the name. Two of the hills have been developed into a resort with youth hostels, cottages, a swimming pool, and tennis court.
Also on top of one is an observation deck 213 concrete steps. In the dry season when the grass is dry, the grass become chocolate coloured, because of that, the name “Chocolate Hills”. The most lovely time to see the Chocolate Hills is early in the morning, so you can see it in the sunrise!
Origin of the Chocolate Hills

Chocolate HillsThe first legend tells of a fight between two giants who threw stones and sand at each other for days, until they were so tired and exhausted they made friends and left the island. They didn´t however, tidy up the battlefield, leaving the Chocolate Hills.The second legend is a lot more romantic. Arogo, a young and unusually strong giant, fell in love with an ordinary mortal, Aloya. After Aloya´s death, Arogo cried bitterly. The Chocolate Hills are proof of his grief, for his tears turned into hills.

Some geologist, means Bohol lay under water in prehistoric times. Volcanic eruptions caused unevenness in th bottom of the sea which was gradually smoothed and rounded by the movement of the water.

Most serious geologist means the explanation as nonsense. Even though the geological origin of the hills has not yet been explained beyond doubt, the consensus is that they are weathered formations of a kind of marine limestone laying on the top of impermeable clay soil. Comparisons have been made with hundred Islands of North Luzon.

Our friendly staff doesn’t simply provide our guests with a place to rest or park their luggage, they also share the best of what they have. This warm, effusive brand of Boholano hospitality is what distinguishes Panglao Tropical Villas from the others.

Theme by Anders Noren — Up ↑